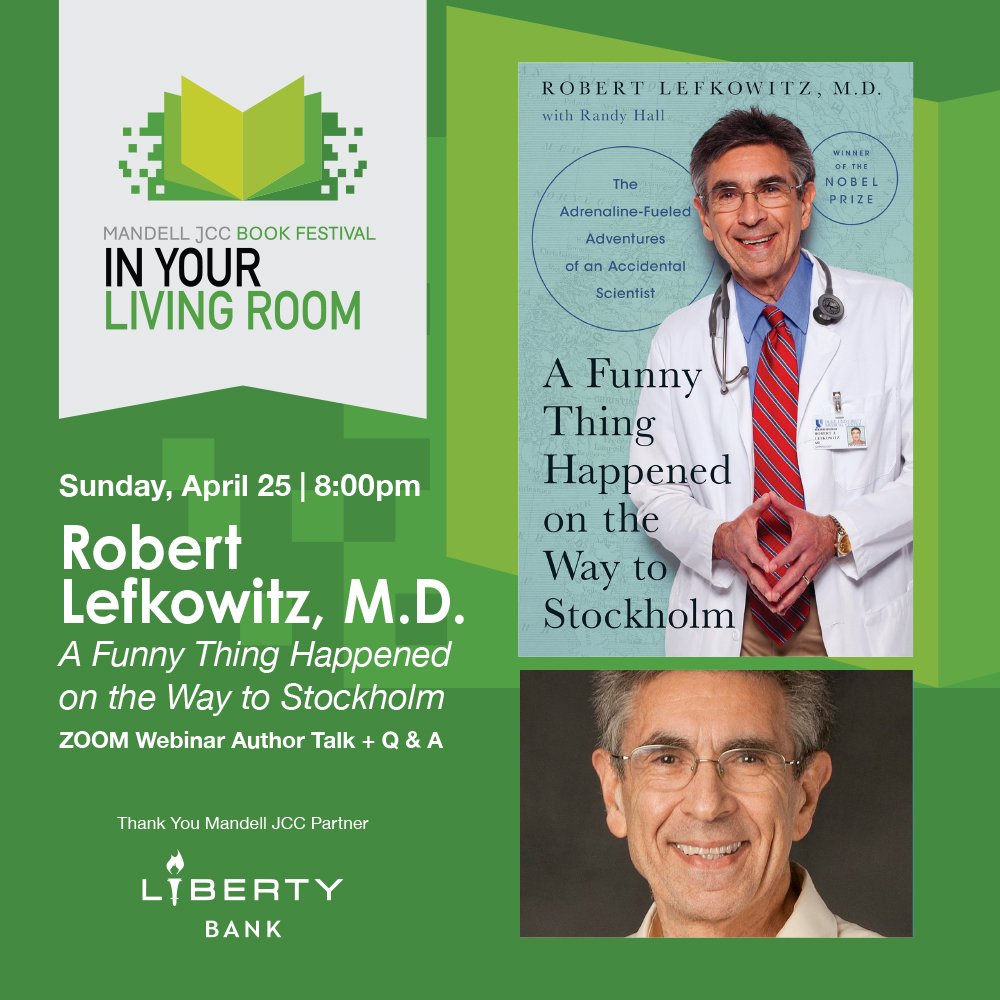 “A Funny Thing Happened On the Way to Stockholm” by Robert Lefkowitz, M.D.
April 25 | 8:00 p.m.
In Conversation with Holly Firfer, CNN Correspondent

Books include signed bookplate! A Cappella Books is the official bookseller of the National JCC Literary Consortium.

The rollicking memoir from Robert Lefkowitz, the cardiologist turned legendary scientist and winner of the Nobel Prize – A Funny Thing Happened on the Way to Stockholm: The Adrenaline-Fueled Adventures of an Accidental Scientist – is a narrative that revels in the joy of science and discovery, written in conjunction with Emory University Professor Randy Hall.

Like Richard Feynman in the field of physics, Dr. Robert Lefkowitz is known for being a larger-than-life character: a not-immodest, often self-deprecating, always-entertaining raconteur. Indeed, when he received the Nobel Prize, the press corps in Sweden covered him intensively, describing him as “the happiest Laureate.”

Dr. Lefkowitz describes being a “yellow beret” in the public health corps with Dr. Anthony Fauci, his time as a cardiologist, and his extraordinary transition to biochemistry which would lead to his Nobel Prize win, all while igniting passion and curiosity as a fabled mentor and teacher throughout his career. In addition to working as a cardiologist, Dr. Lefkowitz is also a cardiac patient himself, and has a strong personal connection to his research. But it’s all in a day’s work, as Lefkowitz reveals in A Funny Thing Happened on the Way to Stockholm, which is filled to the brim with anecdotes and energy and gives us a glimpse into the life of one of today’s leading scientists.

ABOUT THE AUTHOR:
Robert J. Lefkowitz is a Nobel-Prize-winning scientist (Chemistry, 2012) who is best known for showing how adrenaline works via stimulation of specific receptors. He was trained at Columbia, the National Institutes of Health and Harvard before joining the faculty at Duke University in 1973. In addition to being a researcher, Dr. Lefkowitz is a cardiologist as well as a cardiac patient.