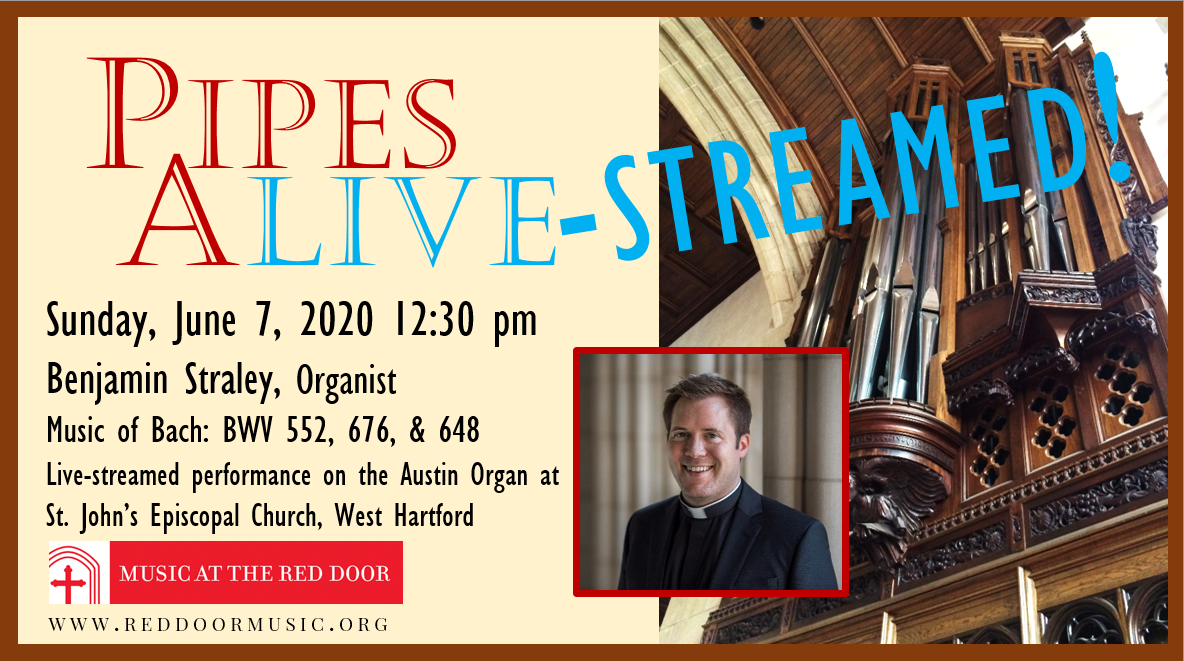 During this period of social distancing, Music at the Red Door is presenting free, live-streamed concerts.

The performance will be live-streamed here:

The Rev. Benjamin Straley is the former Organist and Associate Director of Music at Washington National Cathedral. Prior to this appointment, he was Organ Scholar at Trinity Church (Episcopal), New Haven as well as Director of Music for the Episcopal Church at Yale. Upon the completion of his undergraduate studies with Marilyn Keiser at Indiana University, he entered the Yale Institute of Sacred Music in 2008, where he studied with Martin Jean and Jeffrey Brillhart. In 2010, he became one of the few Americans in the history of the Haarlem Organ Festival to compete in its world-renowned improvisation contest. He was featured in the May 2015 issue of The Diapason as one of the “Top 20 under 30” young organists in the country. He holds both Masters in Music and Divinity from Yale, as well as a Certificate in Anglican Studies from Berkeley Divinity School, and is a priest in the Episcopal Church. He currently serves as Assistant Rector of St. John’s, Essex, Connecticut, and is the Director for the Anglican Singers, a choral ensemble dedicated to music of the English Cathedral tradition, based in New London, Connecticut.

Inaugurated in 2015, the Pipes Alive! concerts take place on the first Sunday of each month from January through June, and draw enthusiastic audiences to hear the region’s finest organists play on one of the most versatile pipe organs in the area. The pipe organ at St. John’s Episcopal Church, known as Austin’s Opus 2761, resounds with 51 stops, 64 ranks, and 3,721 pipes. Since its installation in 1995, this remarkable instrument has been featured often in concert, providing opportunities to share with the greater community the beauty and triumph of organ music.